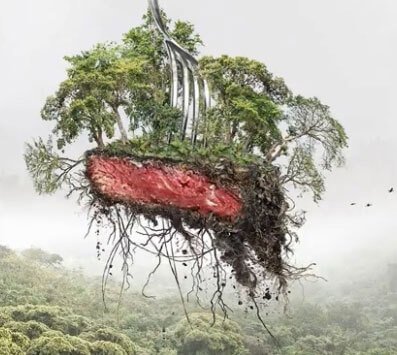 Here we are standing on a clifftop precipice between the disastrous effects of the climate crisis and a global pandemic caused by mistreating millions….billions of animals who live in miserable, unhealthy and overcrowded conditions.

Animal agriculture contributes more to global warming than all the cars on the planet, and is the second leading cause of global warming behind industrial pollution. Eating animals is an inefficient use of the earths’ dwindling resources as it takes sixteen pounds of grain to produce one pound of meat, this translates to being able to feed far more people on a plant based diet than a meat centered diet.

The group of seven leaders meeting to discuss climate crisis and pandemics at the G7 are eating barbecues steaks, fish, lobsters. They have missed the memo from the earth and the other animals and the pandemic disaster.  In the words of vegan animal hero teen and climate activist Greta “Our house is on fire” and the G7 leaders are attempting douse the flames with the flammable fuel that is killing us, the planet and other animals.

We are in the midst of a revolutionary plant based meat product explosion, Beyond Meats, Impossible Foods, Gardein, Tofurky, VFC and more are just a segment of the rapidly growing billion dollar vegan product industry.  How are these world leaders missing it on such an epic scale?

It is our responsibility, each one of the people who care to research and buy truly sustainable and kind fare we need to now, more than ever, vote with our consumer dollar. The choice is vegan. The answer is vegan. The solution is vegan.