After almost four decades of investigating, protesting, educating, and organizing to stop animals from being abused, I, like many other animal activists, before falling asleep see the faces and eyes, with a puzzled or terrified expression of the animals who have urgently needed help and didn’t get it. The images start to role like a film reel which cannot be turned off. They might be the pigs being electro shock prodded off the transport truck into the dark hell of the slaughterhouse or the elephant constantly rocking and pulling at his or her chains in the stereotypical behavior of captive chained or caged wildlife.

Last night before sleep those images were absent and replacing them was a building sense of hope, as I thought of the days’ global media coverage of the first day of the Million Dollar Vegan campaign. In 2015 I met Genesis Butler and her mum, Genelle, when Animal Hero Kids gave Genesis the Animal Hero Kids Paul McCartney Young Veg Advocate Award. I had seen a grainy video of a spoken word she did for her kindergarten class called “I have a Dream” about her dream of a day when people don’t eat animals anymore, then when I learned Genesis turned her entire family vegan at three years old simply by asking questions about the history of who was on her plate, well, it was one of those moments of a sense glimmering hope I get when I meet one of the kids or teens who are determined to help other animals without any previously learned self-imposed limitations. 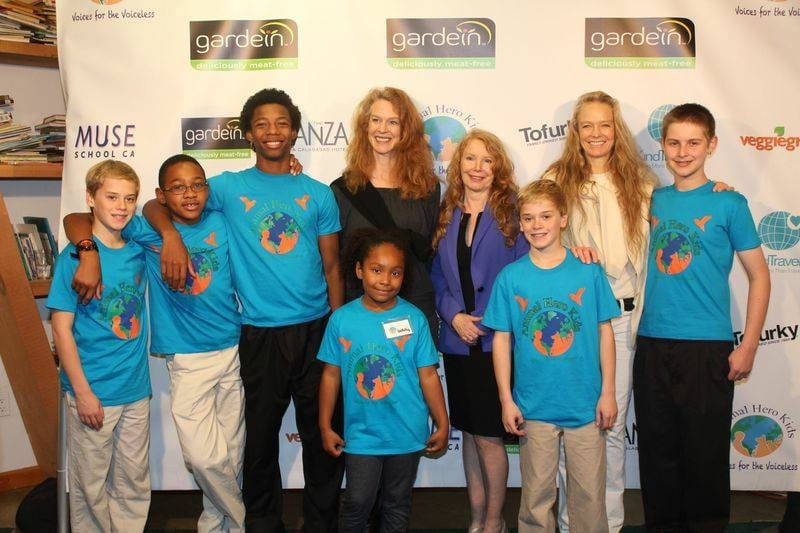 Genesis front and center at the 2015 Animal Hero Kids Awards with other courageous award winners at the Muse School, the first vegan school in the US, founded by Suzy Amis-Cameron and Rebecca Amis who are also pictured with Animal Hero Kids founder, Susan Hargreaves. Photo from the “Animal Hero Kids Voices for the Voiceless” book. Photo credit: Heather Hyde

Fast forward to yesterday, February 6th, 2019, and Genesis is an inspiring, eloquent activist and the lead in the global Million Dollar Vegan Campaign. If you have not read about it in the news or seen it on your television screen news, yet, you will. Pope Francis is being offered one million dollars for his favorite charity (or charities) to go vegan for lent by the new Million Dollar Vegan group masterminded by Matthew Glover and Jane Rule, founders of the uber successful Veganuary Campaign. AnimalHeroKids.org is proud to join as a collaborative supporter of the million dollar campaign. Evan, Animal Hero Kids eight year old President and I were interviewed by the Million Dollar Vegan Campaign film crew, here in Florida.

When I went to catholic school as a young child in Australia, I would look at the poster on my classroom wall of a lion, a lamb and Jesus wearing a long white robe. I derived comfort from the artworks’ visual depiction of kindness to other animals as the nuns told stories from the bible. Listening to the tales of St Francis of Assisi I never once suspected that any religious leaders would agree with animals being harmed or killed, there was no knife hidden behind the robe of Jesus.

How can the Pope refuse this incredibly logical offer to help stop animal suffering, climate change, global hunger, and to improve human health by setting an example for all of his followers?

Instead of the saying “is the Pope Catholic?” will it morph into “Is the Pope vegan?” I believe the million dollar vegan campaign is the final global nudge needed in the tipping point to monumentally increase veganism, mainstream. In other words, it’s happening now, way faster than I would have thought when I became vegan in the mid 1980’s. We are in the midst of a public shift, a shift the earth, the climate and the other animals cannot afford to wait one more minute for.