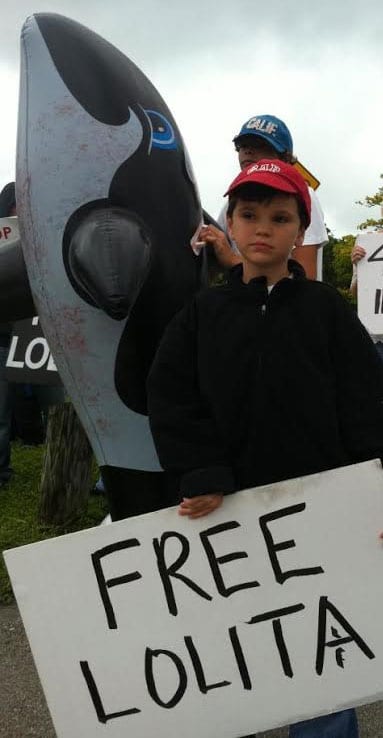 The sound was unfamiliar, a loud banging and slapping under the waves, my mother and the whole family were thrashing in an all-out alarm storm of cries. I struggled to move reaching my tail as far as I could, no movement, no escape, the net tightened with each flinch. I was trapped, and for the first time ever, far above the water, completely bound,  hearing the yelling, of my family, left behind.

That was 47 years ago, I barely recall the sound of other orca’s like me, I only hear clapping and orders, and once in a while, a chanting, outside these cement walls, carried across with the ocean breeze..Free Lolita.

47 years ago, think about what you were doing 47 years ago -if you were born then- think of how much time has elapsed and now think if you were trapped in an elevator the entire time or a in a bathtub like the courageous activist outside of the Miami Seaquarium for a month.

In 1998 when 36 of us activists were unjustly arrested at SeaWorld in Orlando for protesting on public property, the general public were not aware of the plight of imprisoned marine mammals. A sea change has arrived, now public perspective is on the side of freedom for all captive wildlife.

The people who keenly feel for the plight of enslaved fellow earthlings will never give up, we did not go away when I and 4 other people was outside of Wonderland in Ontario, or Ocean World in Fort Lauderdale in 1988,  both have no more captive wildlife, Ocean World has completely closed down. We celebrated.

Animal advocates will return to celebrate when there are no more captive marine mammals at the miami Seaquarium too.

We will never give up until there are no more cement jails. No more trapped whales.