The Heart Whisperer – Opening Hearts to Kindness to All Animals 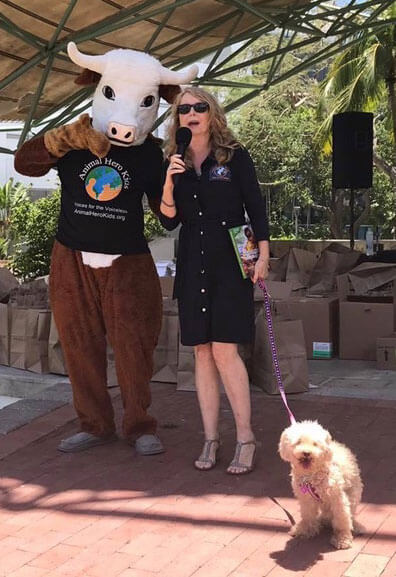 The school cafeteria was hushed, two hundred and fifty elementary schoolers were rapt as they waited for the ending of one of the animal rescue stories, I was telling.

“…and then the high school girls tried to buy their pigs at the auction to save them from the end of the Future Farmers of America school “project”, they couldn’t afford the $1,000. for all four pigs their school coach had raised the bidding, had they failed after all their work and hopes were dedicated to rescue their pigs they had cared for since they were babies? Little did they know I had called a friend of animals to be at the auction who stepped and saved the pigs at the last minute, here’s the photo of two of the Coral Gables High School girls.”

The audience erupted in spontaneous clapping and cheering, when 250 elementary school aged students had their hearts opened to considering the lives of pigs in peril. Increased empathy is just one of the positive results.

The true tales of daring animal rescue stories from the Animal Hero Kids Voices for the Voiceless book resonate with all ages. It has been my life’s work. 41 years so far to cause peoples’ hearts to open to include all species of animals in their consideration, changing hearts changes consumer choices.

I was doing an interview with a reporter recently and when I told her what I saw at a chicken hatchery when I was 9 years of age, she began to cry and said she had no idea.

One of my friends calls me a heart whisperer for animals because my stories, presentations, videos, books… cause peoples’ hearts to open to helping all species of animals. I reply, whatever works, I will take and own her moniker “the heart whisperer” and use it to expand my message.

So now as we approach the holidays that are associated with giving, gifts, goodwill and peace on earth, will you consider my heart whispering message?

Consider how you can help others, two-legged and four, finned, furred and feathered. This holiday gives the gift that keeps on giving to animals, the heart and you. Go vegan!

There’s an explosion of vegan food choices in the grocery stores now, an incredible array of scrumptiousness without the animal cruelty ingredients.

Here’s my gift to you, free tips by Veganza Animal Hero.